I learned how to make biscuits and gravy when I was in my early twenties, and I have not modified the gravy recipe much from the original one I was given over 25 years ago. It has been a favorite of my kids since they were toddlers, and I make it for them every now and then when we are all home on a Saturday morning, and even occasionally for supper on a weeknight. It is fairly quick to prepare, especially when we use store-bought biscuits, which my kids prefer. However I prefer homemade biscuits and I finally developed a nearly foolproof recipe for them, resulting in tender, flaky, buttery biscuits every time. I made them last week for the kids and they did not complain, which means they were good!

I went to a rendezvous this week and one of the people I was camping with had mentioned that he liked biscuits and gravy so I decided to bring along the ingredients to make some at camp for the whole gang. I did not want to haul along bags of flour and containers of the spices needed for my recipe, so I measured out what I needed for a double batch of homemade biscuits and the roux for the gravy into glass jars. Of course I had to bring milk, butter and sausage in a cooler, but measuring ahead of time saved a lot of space and prep time at camp. Everything was cooked in cast iron skillets over the campfire. It turned out wonderfully, and the campers went away with full bellies.

Here is the recipe. Serves 6-8 hungry men and a couple not-as-hungry women. This is a double recipe, can easily cut in half for a 4 serving meal.

At home: Fill a 1 quart jar with 4 cups of all purpose flour, packing it in, but leaving about 1/2 inch or so on top for the rest of the seasonings. Add 6 Tbsp baking powder and 2 tsp salt. Cover with lid and close tightly. This is the biscuit mix. You will add 2 sticks butter plus 2 Tbsp bacon grease and 1 1/2 cups milk to this later.

Fill 1/2 pint jar with 3/4 cup flour, powder, and 1 tsp each onion powder and cayenne pepper, 2 tsp each salt, black pepper and ground mustard. Cover with lid and close tightly. This is your gravy mix. You will add this to 2 lbs browned breakfast sausage and 1/4 cup bacon grease, along with 4 cups milk.

Sometime before you prepare the meal, save some bacon grease from a pound or two of cooked bacon. This adds a lot of flavor to both the biscuits and the gravy. This time, I made bacon the day before, poured out the grease into a jar and didn’t clean the pan. I baked the biscuits in this pan.

Put the 2 hard sticks of butter and a couple tablespoons of bacon grease in a mixing bowl. Cut the butter into small pieces, then cut in the flour from the quart jar, mixing and combining until most of the butter is incorporated into the flour. There should still be some small chunks of butter. Add 1 1/2 cup milk and mix until combined. Form into a ball and flatten into a 1 inch thick rectangle, about 8 inches wide by 12 inches long. Cut into 24 squares. Place the biscuits into a large greased cast iron frying pan. Cover and place over the fire.

In a separate cast iron pan, brown 2 lbs sausage. When cooked, do not drain, and stir 1/4 cup bacon grease. Stir in flour mixture from small jar, then stir in 4 cups milk. Continue stirring until gravy thickens. 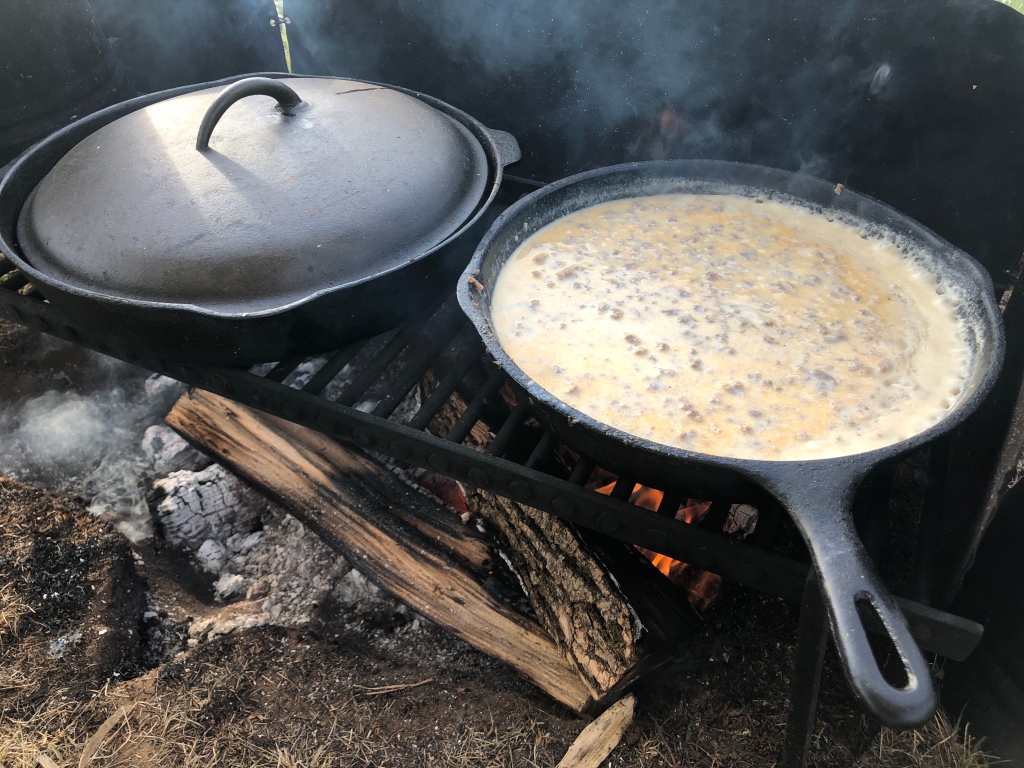 The biscuits took about 25 minutes to cook, the fire was pretty slow to start out. I increased the heat, and worried that the bottoms would burn. They did not, they browned and got kind of crispy, which added to the flavor. 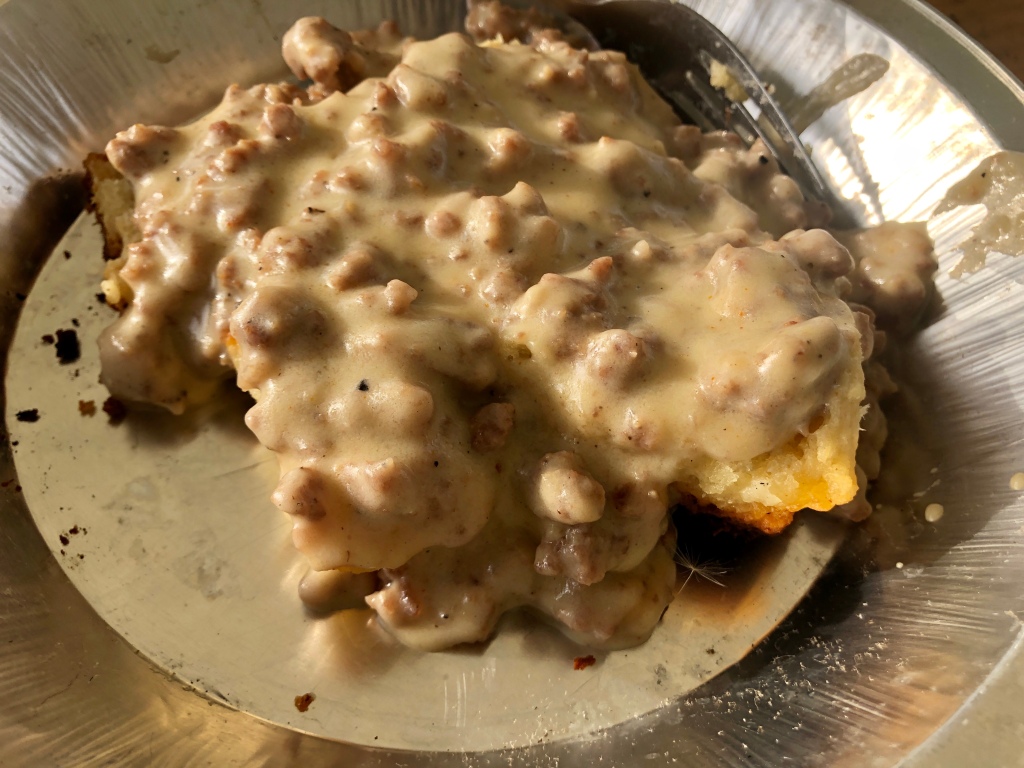 Break open a biscuit or two and place onto a plate. Smother in gravy. Sprinkle on some hot sauce if you like more heat. Yum! 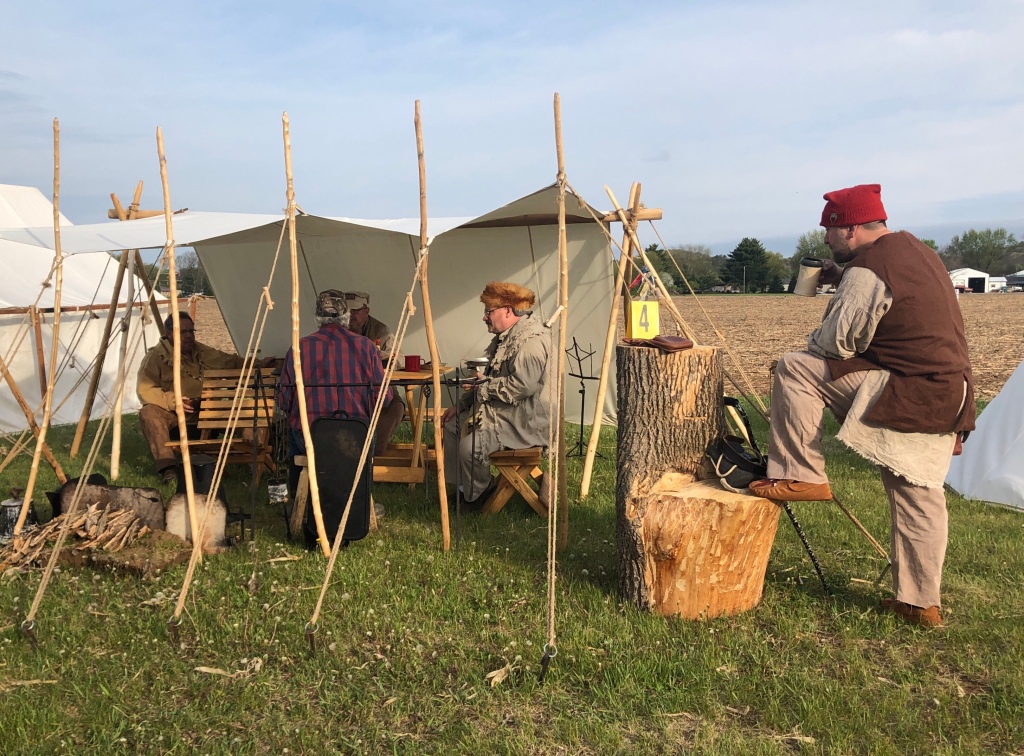