I’ve always loved jerky, to the point that when I have it around, even just for myself, it doesn’t last very long. Of course, if I had been around 200 years ago living in the wilds Wisconsin woods, and had to ration out my provisions for the winter, I’d be more parsimonious in my enjoyment of it.

I asked a friend for his best jerky recipe, and he gave me this one. He did not specify quantities, saying that so I had to improvise, and of course I adjusted it to use what I had available in my house, choosing to use fresh garlic and onion to dried, but the first time was a charm and I wrote down what I did. Here are the results.

Keep in kind that the only salt in this recipe comes from the soy sauce, and if you prefer saltier jerky you may want to add a little table salt to the recipe, but I thought it was perfect the way it is, and the flavors of the venison and the red wine really shine through.

This recipe marinates about 3 lbs of meat, which fills all the trays of the dehydrator nicely. It could probably do a little more. 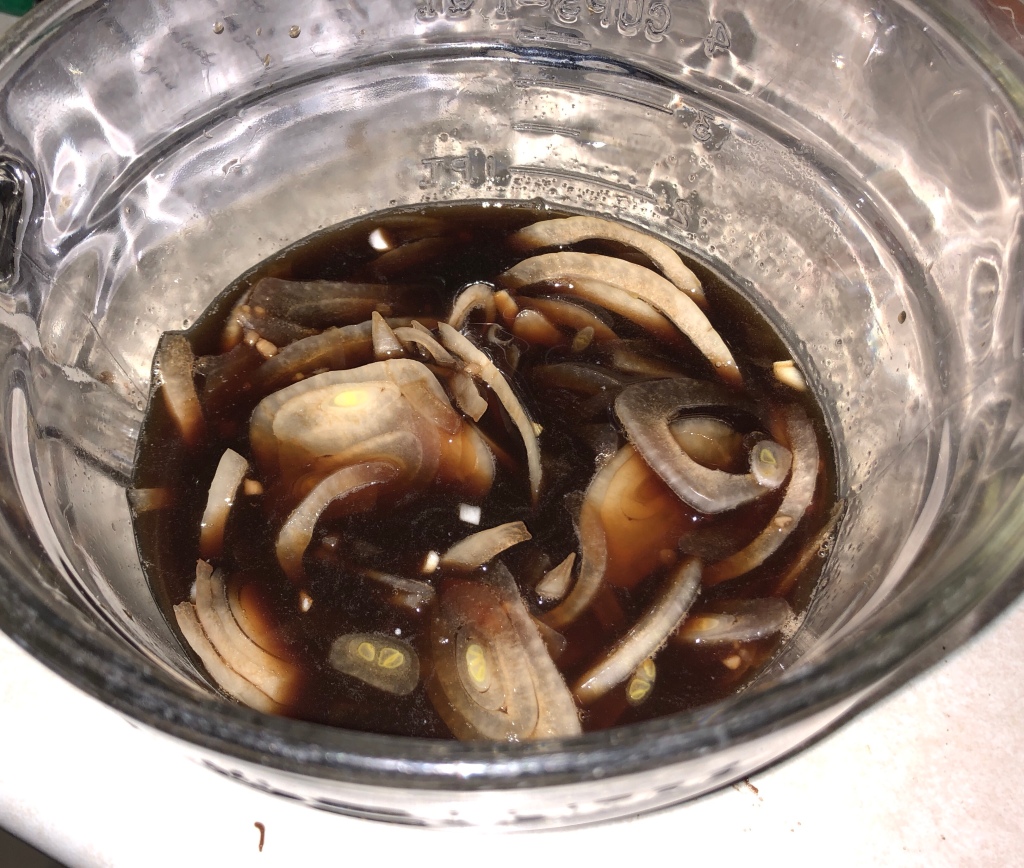 Add thin strips of meat. Here’s the wine I used. My daughter helped me pick it out on a trip to Total Wines last summer.

Of course I had to finish the bottle once it was opened. One of the perks of using wine in cooking. It turned out to be a delicious choice.

Put the meat and marinade in a covered bowl or a couple of gallon zip-lock bags and let sit in fridge or other cool space for 12-24 hours.

Dissolve 1/4 cup honey into 1/2 cup water in a small bowl. Remove meat strips from marinade and dip unto honey mixture, and place onto dehydrator trays. I put the onion slices on top of the meat strips on the trays too, which turned out to be an excellent idea. Discard remaining marinade and honey mix. Turn dehydrator on high and dry to desired dryness. The dryer it gets, the longer it will last without spoiling.

The results were amazing, definitely the best jerky I’ve made, at least in my somewhat learned opinion. No one else in my household liked it though, so I had to make them some more using the store bought jerky spice mix. Their loss is my gain, as I now have a big bag of jerky all to myself! And the other people I’ve sparingly shared it with have said they liked it better than most other jerky they’ve tasted because its not salty!

Let me know if you try it. I’d love to know your opinion!