Combine 1 1/2 cups white flour (unbleached all purpose or bread flour) with 1 cup room temperature water.  Place in covered container (a quart jar works well, a 1/2 gallon jar is even better, but a glass or plastic bowl will work fine too).  Cover with lid or plastic wrap (or wax paper and a rubber band).  Let sit on counter overnight.  The next day, stir mixture and add 1 cup flour and 3/4 cup water (mix well).  Let sit for another day.  On the third day you may start using for baking, removing 1 cup starter for 2 loaves of bread.

To speed up the rising process. You can add 1/2 tsp of yeast to the bread dough the first couple times you bake to ensure proper rise, but the dough should rise on its own without adding commercial yeast.  The dough will take a long time to rise without any added yeast, but be patient!  Once is starts rising, which can be several hours into the fermentation process, it usually continues to rise a lot faster. 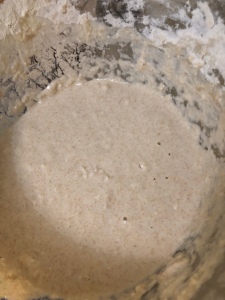 If you bake a lot, and have time to feed the starter on a daily basis, it can be left out on the counter.  Watch out for fruit flies – they can ruin a good starter pretty quickly.  I leave my starter in the refrigerator between feedings and only remove it when I want to bake, about twice a week.  I remove the starter I will be baking with, feed the remaining starter in the jar and return it to the fridge.  You can add whole wheat or rye flours occasionally to alter the overall flavor of the starter.  Experimentation is good! Also, you should notice liquid forming on the top of the starter in the jar after it sits for while. This is alcohol, and it is fine to stir it back into the starter, and it is also a good idea to skim it off the top and remove it every now and then so the starter doesn’t get too boozy. I’ve found that my starter keeps better when I remove it.

I have two starters that I work with currently.  I started the first one in November of 2016 and froze a small jar of it in February 2017, and removed the jar from the freezer in June, 2018.  I had forgotten that I put it there and found it when I was cleaning the fridge.  I recalled that I put it in there as a test in case my starter went bad – which it did not long after that.  I had begun a new job and got really busy, left the starter on the counter for several days without feeding it, and it went bad on me.   Thankfully I had saved some, and it came back to life really quickly after it thawed out.  It is September now and it is still quite active and makes great tasting bread.

The other starter was given to me by a friend, around the same time I reactivated the frozen starter.  He had started it in 2014 and lives in a town about 90 miles away.  It is a really tasty starter.  I thought I had ruined it shortly after getting it, because the loaves were not rising well at first, but I babied it along and it is working great now.  I keep both starters side by side in 1/2 gallon jars in the fridge and alternate using them for baking. 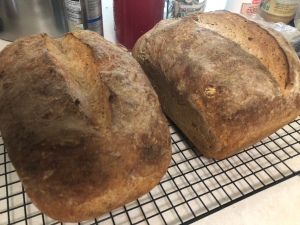 In recent years, bread had gotten a bad rap as far as its relationship to our health goes. White bread especially is not very nutritious and can cause blood sugars to spike, but even whole wheat and other whole grain breads have similar problems. And even more recently, the gluten in bread has become an enemy to many people, causing upset stomachs and leaky gut. It seems though that these problems that people have with consuming bread has developed only in the most recent few decades.

Why is this? Why, when bread has been a staple of human life since nearly the beginning of human existence, is it now causing so many problems in our diets? Gluten and glucose have always been in the grains that are used to make bread, but the way that we make bread has changed. Bread used to be leavened naturally, meaning that it is left to rise using the yeasts that are present in the environment naturally, which takes longer and, as I will explain below, removes much of the harmful effects of gluten and glucose in the grains. But since the development of commercial yeast and store-bought bread, the breads that we eat are risen faster, giving no time for the bacteria and yeast to work its magic on the flour.

The traditional way of leavening bread creates a bread product that we now know as Sourdough bread. I’ve always enjoyed the tangy flavor of sourdough bread, but only recently began baking and eating it almost exclusively at home. I’ve tried many different recipes using different types of flour, including white, rye, and wheat, with great results, and trying a few different recipes from friends for other things made with a sourdough starter, such as pancakes and biscuits.

I’ve been hearing a lot about using sourdough in an otherwise gluten-free diet. I’m talking about bread made with real wheat flour that has gluten in it, but made with a traditional sourdough starter. I did some research, and it makes a lot of sense to me why some people following paleo or gluten free diets can benefit from eating sourdough breads.

The key reason sourdough is different is that it is a fermented product. A sourdough starter is made by combining wheat flour and water and letting it sit and ferment, gathering healthy bacteria and natural yeast from the air. The starter, when combined with more flour, water, a small amount of sugar and salt into a dough, will develop carbon dioxide and rise the dough in the same manner as breads made with commercial yeast. However, the rising time will be longer, four to twelve hours in most cases. This long rising time is the key, because this is where the problematic gluten is changed into something helpful for those who are gluten intolerant.

During the rise, the enzymes in the starter ferment the flour. First, the enzymes reduce phytic acid in the grain that inhibits our bodies from absorbing the many minerals contained in the grain, thus allowing the magnesium, zinc, phosphorus and iron to be absorbed.  This does not happen with quicker-risen breads and these nutrients go unused.

The removal of phytic acid also allows the enzyme tripsin to do its job of breaking down proteins in the grain into peptides and amino acids. When these proteins are not broken down properly, they can irritate our stomach lining and cause inflammation and leaky gut.

Right here is the “aha moment” when it comes to wheat and gluten. Gluten is a protein. And a large and difficult protein to digest, even if you don’t suffer from Celiac disease. Gluten is made up of two compounds, one of which, Gliadin, is the culprit for Celiacs’ suffering. The other, Glutanin, is the part that creates elasticity and has no harmful effects on our gut. Lactobacilli created during flour fermentation in sourdough break down the problematic Gliadin but not the structural Glutanin. Studies show that in just a four hour fermentation, up to 80% of the Gliadin is broken down. It is possible that for some sufferers of Celiac disease, they could possibly eat a sourdough that has been fermented long enough and not develop any of the harmful effects they would normally get from other wheat breads. Of course those folks would have to experiment with it to see what works for them.

Other good things about sourdough

Also, sourdough has an increased level of satiety over other types of breads, allowing you to eat less and feel fuller longer. I may have been personally experiencing this effect throughout the summer since I began eating homemade sourdough breads almost exclusively. Without really trying to, I have been eating less food overall and have lost about twenty pounds with little increase in my activity level.

A sourdough starter is simple to make and not difficult to maintain. It does require daily attention if you keep it out on the kitchen counter, but I have found that refrigerating the sourdough and removing it weekly or more frequently only when I am planning to bake something works quite well. I even froze some starter for over a year and revived it and it is now as active as ever three months later. Breads made with sourdough keep longer than yeast breads, as mold is less likely to develop. A sourdough pancake batter can be mixed one day and used for several days afterward, developing a deeper, richer flavor each day. I regularly bake white, rye and 7-grain wheat sourdough breads, at least weekly, and share loaves with friends.

Sourdough bread may be the answer to our ever-increasing problems with gluten and glucose.  It can help you lose weight or maintain a healthy weight, and allows for the minerals in the grains get into your body’s cells. You can make your own sourdough bread or buy it from a local baker. Just make sure to ask your baker how long their dough is developed to ensure that they are putting it through a proper fermentation. Not only will you enjoy a delicious bread and follow an age-old tradition, but you will be doing something good for your health.