I had been looking forward to the primitive biathlon at Forts Folle Avoine for a whole year, ever since the first one, which took place in February 2018, was over. Since I had just acquired my very first traditional muzzleloader, I wanted to get in on the fun.

A primitive biathlon is a winter event that combines snowshoeing with the sport of shooting muzzleloading guns at targets. It is a timed event where the participants snowshoe a course and stop at regular intervals to shoot at targets. Each hit reduces your total time, so that marksmanship is valued over speed. The only rules are that the participants must shoot a roundball bullet from a traditional muzzleloader. Otherwise, they can use any kind of snowshoes, and dress in any style they choose. Fortunately, most participants are in it for fun, and enjoy dressing in period-correct clothing that would have been worn by wintering voyageurs and woodsmen from the fur trade era (pre-1850). 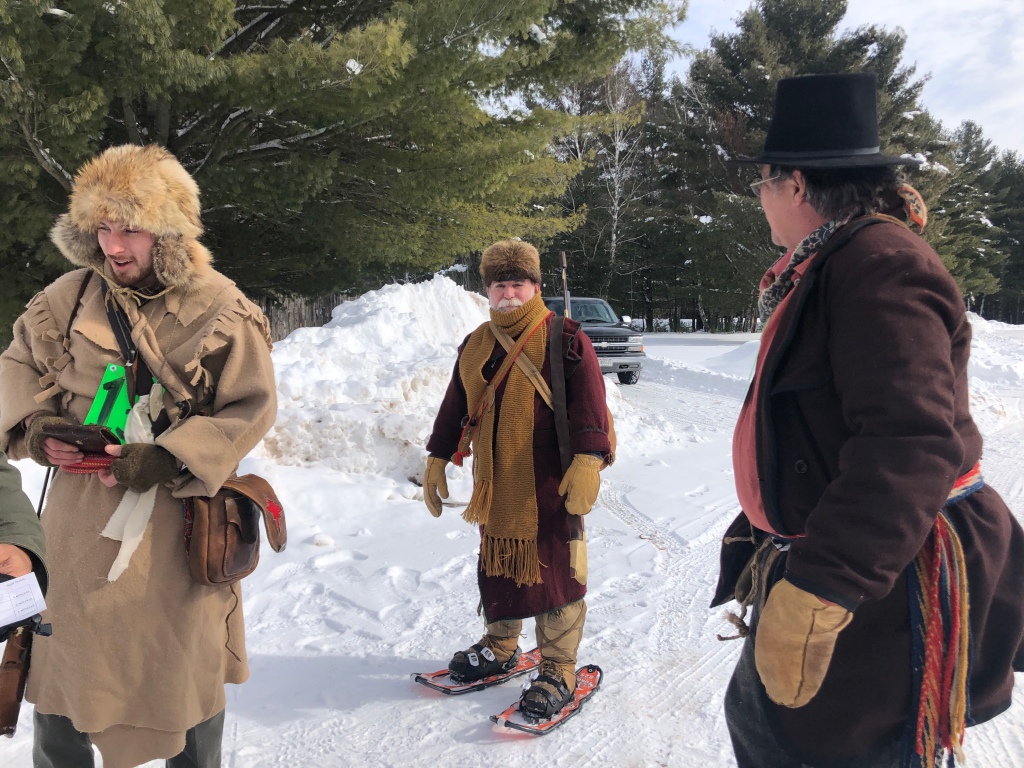 I will readily admit that I performed horribly and had not done as much to prepare for the event as I could have. I only spent one day working on sighting in my gun last summer, and could have used a lot more range time getting it sighted in better. It was sighted well enough for deer hunting, but not for shooting at very small targets like the ones used in the biathlon. I also just need a lot more practice. I am a fair shot, but I proved that practice makes perfect by missing the first 12 shots altogether. Unfortunately since I was shooting into a snowbank, there was no way to know exactly what I needed to correct.

I did however prepare for fast loading. I had asked the organizer what the rules were, if we would have to measure out our powder before each shot, or if we could preload. I was instructed to look at the rules online and use my brain (thanks 🙄) There really were no rules. So I figured that meant anything goes. I thought about a good way to pre-measure my 40 grains of powder without using 16 separate modern plastic loaders, and the image of civil war soldiers tearing open paper wads with their teeth (in the movies) came to mind. I stopped by my bank and asked for 20 dime rolls. They were the perfect size to easily pour into the muzzle of my 50 caliber Hawken-style rifle. I spent my lunch hour the day before the event taping and filling each roll with powder.

I asked my boyfriend, who is quite handy and has the right tools, to make me a few roundball loaders by drilling 1/2 inch holes in a length of maple about 1 1/2 inch in diameter. I then used bore butter and loaded the 16 round balls and lubed patches into the holes. The results were great, and between the preloaded powder and balls, I was able to cut in half the time it takes to load the muzzle between shots. I also was generously loaned a very nice capper from one of the other participants, who happened to win the event in the category I competed in that day (pretty sure I came in dead last). The capper held all the caps I needed and made loading the cap a lot faster with less fumbling with cold fingers.

I was able to hit three of the sixteen targets. Each of these were long chains that were hanging from the target frames. It made me realize that my aim was only off either high or low (thinking low), so all was not completely lost. I am happy to report that my snowshoes held up quite nicely throughout the course. I had originally planned to compete in the long course, but my ankle is still weak from spraining it last fall, so I had to change to the shorter course at the last minute.

All in all, I had a good time at the event, despite my poor shooting. I think I let my nerves get to me, even though it was all just for fun. I had been thinking about the event off and on all year and had gotten myself pretty worked up about it. I was disappointed in my performance, but I can now look at it as a learning experience. After all, I am new at this! I am hopeful that next year I will shoot better, and that I won’t be the only female participant, but I do love hanging out with these guys.