Spring is here and birds are returning from their southern ventures over the winter. Crex Meadows Wildlife Area is one of the premier birding hot spots in the country, and for many good reasons.

Spring birding usually begins at Crex Meadows around the second or third week in March, but sometimes later, when the first pairs of Trumpeter Swans and their offspring return to the wildlife area to claim or reclaim their nesting spots. Trumpeters are often seen in the region throughout the winter, but not often in the wildlife area itself because there’s little open water. There are a couple dozen nesting pairs in Crex, and many other non-nesting swans use the wildlife area for feeding and resting.  Tundra Swans can also be seen migrating through to their nesting grounds on the Arctic tundra.

Resident Bald Eagles return even earlier than the swans to begin nesting, but eagles that are heading further north move through around the same time that the first ducks and Canada Geese appear. Many of the geese stay in the wildlife area to nest, but a larger number will go further north. A few of the early migrating duck species stay, such as Ring-necked Duck and Mallard, but the Hooded Mergansers, Scaup, and Goldeneye will move on. All the ducks seem to have romance on their mind, and a lot of courting behavior is displayed while the ducks are visiting Crex Meadows.

Most folks I know who I consider “regulars” to Crex await the first reports of Sandhill Cranes returning before they come to visit. Crex Meadows and the surrounding areas within about a 20 mile radius is known as the Sandhill Crane “capitol” of Wisconsin, at least in the fall when 10,000 to 20,000 cranes use the region as a staging ground for their annual migration south to their wintering grounds. However, in the spring, only the resident nesting cranes and their offspring from the previous summer return to Crex, while the rest continue past to their own nesting grounds elsewhere in Wisconsin, Northern Minnesota and South-Central Canada.

Late March and early April brings open water and more migrating ducks. Species such as Ruddy Duck, Bufflehead, Horned Grebe, Common Merganser, Redhead, and Canvasback, stop by to feed and then head north. Others like Northern Pintail, Northern Shoveler, Blue-winged and Green-winged Teal, and American Wigeon may choose to nest at Crex but mostly move on as well. Pied-billed Grebes and Red-necked Grebes will nest at Crex and return around this time as well.

The first hawks to move through are Rough-legged Hawks. They do not migrate as many others do, in fact several individuals often winter at Crex, but if the snow gets too deep they may move further south. Around mid-March they begin heading back north to the Boreal Forest where they will spend the summer. Others that are often observed include Broad-winged, Sharp-shinned, Red-tailed, and Red-shouldered Hawks. Some may nest in the area, some move on. Male Northern Harriers return first, usually around the end of March. Females follow within a couple weeks. 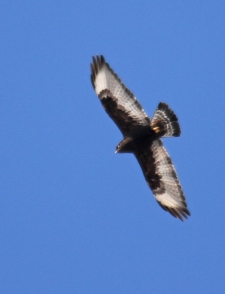 As far as passerines are concerned, the first migrants to return are Robins and Blackbirds (males always arrive a couple weeks before females), and then the sparrow species. Expect these to begin arriving in mid April or just before. Thrushes, wrens and the first early warblers come next, then the vireos and finally the rest of the warblers start appearing by early May.

Other birds of interest include Whip-poor-wills, which are mid- to late-April arrivals, Yellowlegs, Woodcock, and Common Snipe  which appear in early April, and the rest of the sandpipers who generally migrate through in May. Blue and Green Herons return in April, and Short-eared Owls can often be seen moving through the areas in April as well.

While not a migrant, springtime also means Sharp-tailed Grouse dancing. The grouse gather in “leks”, or dancing grounds in the early morning where the males cluck and strut and dance and fight in order to impress the females and earn the right to breed with them. This is a fun and interesting activity to observe. While Crex does not currently have blinds to reserve, visitors can still find the leks on the north end of the wildlife area and see the grouse dance in the early morning hours (starting before sunrise!).

I could go on, but with a bird list of over 280 species observed at Crex, it would take awhile to go through all of them. You can pick up a list of these birds and get directions and advice at the visitor center at the southwest corner of Crex Meadows, just on the northern outskirts of the Village of Grantaburg, at the intersection of County Roads F and D. Happy Birding, and see you on the meadows!